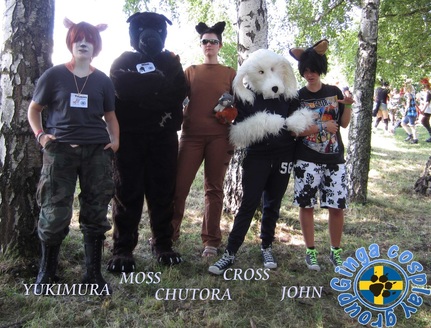 Here is a small introduction in english

It all started with small talk on NärCon 2012 with persons who are puppy Gin and Ben.
(Want to point out that puppy Gin is the first cosplayer Silver Fang in Sweden, so all the credit!)

November 2012, was created cosplay group, with 11 brave souls.
Besides having fun and fellowship in ginga fandom do we have some goals.
We are working to get the interest of the Silver Fang in Sweden up again.
Which may help to get the translation of manga, like Finland succeeded with much hard work and heart.

We cosplay the anime versions, so people recognize the characters.
How a character's choice goes to is usually to choose a favorite, but also should be able to imagine "In character".
Thought for the future is to be able to offer some Ginga feeling like in the anime.

What we require of members of the group?
Active members is more than wanted, who do not hesitate to help when there is opportunity.
Gladly come up with ideas, knowledge, etc.
When it comes to cosplay so we are pretty spread out, we accept from a full fursuit to the so-called musical style.
Musical style involves tending clothes, ears, tail, paws, paint the face. As long as you see who it is supposed to be. 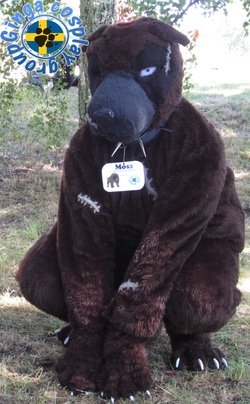 "Chose Moss from the beginning mostly because he suited my body shape, but also to his manner and personality.
He's a big old uncle to everyone in the group
Did not that have made Moss before so why not?
But have cosplaying him he grows more and more to me.
Moss is my first cosplay I've done. Have done two heads and two front paws so far. But should rebuild the entire Moss because they found more suitable fabric to Moss color.
Can proudly say that 98% are hand sewn, the scars are stitched with embroidery thread to get to what looks best "